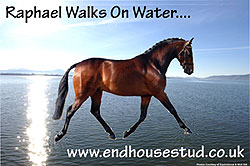 "The Topspec Supreme In Hand Champion was Thursden Vallye Raphael, who was also our Roseberry overall Champion and the Spring Show Supreme- there is something in his stud advert that states " he walks on water" he has certainly lived up to that at Area 4 shows this season"

Frozen Semen for this exquisite pony is available in: Australia, New Zealand, Northern Ireland and the European union as well as standing at stud in the UK. Excellent quality chilled semen also available. Frozen Semen Shipping Costs and Terms

Thursden Vallye Raphael a striking son of Graded Sports Pony Stallion Aimbry Chester out of a classically bred SPSS graded Yealand Nightowl mare. This elegant pony has an exquisite head, fabulous athletic paces and superb temperament. He has very correct conformation with a fabulous front, length of rein and the ability to inject quality into all types of mares, continually producing his own stamp over and over again. He does not carry the red gene so therefore has never produced a chestnut foal even to chestnut mares. This attractive talented pony stallion shows a careful jump over poles, loose jumping up to 1.25m and is bold and brave across country water, ditches, banks etc hacking out alone and in company. He has been fully vetted and licensed with the National Pony Society, & Graded with the Sports Pony Stud book he is regularly ridden and handled by children which must surely be test ament to his outstanding manners and temperament, he is the perfect Childs pony - the type mothers dreams are made of.

He is now a Dressage pony the aim was train him to medium level be selected with a junior rider for BYRDS pony teams, but we have had so much fun training & competing him through the levels we aim to continue and see if it is possible to train him to Grand Prix. In 4 years of training he is already competing at Prix St George level he currently has over 180 British Dressage points. He has won & been placed consistently from novice to PSG level with scores of up to 71% and is now aiming to qualify for the summer regionals at PSG level. He was selected for the PBA team for The NPS/Topspec International Dressage Final at Addington 2012. In 2009 he began his showjumping training with international junior showjumper Lara Whiteway who was a member of the Junior British Team; he is very brave and careful over a fence. Autumn 2009 he competed at the Cherif Championships carrying a side saddle something he took to after only a week's training. His long term career plans are to be produced as a top competition pony, his career potential is unlimited.

2011 he was the sire of Party Time BEF highest placed Sports Pony Yearling at the British Breeding Awards.

2014 he was the sire of Tarnbrook Take It All BEF highest placed Sports Pony 2 Year Old at the British Breeding Awards.

We consider him to be a superb choice to breed top class children's competition ponies including show hunter ponies, working hunter ponies, dressage, and jumping ponies. As well as the ability to down size to breed fabulous Hacks, Ridden Part Bred Arabs and Intermediates from larger mares.

His youngstock and foals are proving to be exquisite with fantastic temperaments and conformation and that incredible “look at me” factor. Raphael is a top class multi champion performance pony stallion with an outstanding competition record. He surely must be the best performance pony stallion standing in Lancashire and probably without a rival in the North West of England.

He is available through AI only Fresh semen onsite – or Chilled Semen for UK use - Frozen Semen is also available in Australia, New Zealand, Northern Ireland and the European Union.

Covering certificates are available from the NPS & SPSS. Please note Foals conceived by Artificial Insemination offsite will need to be parentage tested for registration with The National Pony Society.

We consider Thursden Vallye Raphael to be a superb sire for quality Riding ponies, Working Hunter Ponies, Show Hunter Ponies, Showjumpers and dressage ponies along with the sort of pony that children’s dreams are made of. To horses he has the ability to downsize and to produce hacks, riding horses, and intermediate show-hunters/Show Riding Type. His foals are exquisite with fantastic temperaments, conformation and that incredible "look at me" factor.

Stablename Chocolate as everybody wants a piece of him !!! book early to avoid disappointment as he will stand to a limited amount of mares. Watch this space, dare you not utilise his bloodlines!!!

1st & Champion Ridden - Part & Pure Bred Arab - Royal Lancashire Horse Show – ridden by Amy Hunter – a fantastic result as Amy literally sat on him for the first time ever as the class began!!

Aimbry Chester is the Pink Papered son of Wadacre Chicko and is really bred in the purple, his relations include Ramiro Z, Lady Killer, Galanthus, Rastell who was a top level graded jumping Stallion in Sweden and Raimondo who was an international Showjumper and Sire of graded Stallions Ragtime, Rinaldo and Ramir.. He is related to several top class horses Ratina Z by Ramiro, gold medal winner at the world equestrian games 1994, Libero H and Taggi. His full brother Aimbry Cabana achieved approved status at the Anglo European Stallion grading and in his first year competing he won young rider gold medals and many novice championships. Cabana was elementary national champion 1997 and Homebase 5 year old dressage champion He is graded Advanced Medium Dressage, has won 12 times at Medium Level and is now working at Advanced Level. Placed Medium National Final at Stoneleigh National Dressage Championships. He was also graded lifetime Sports Pony Stallion. Chester is also ‘ The Face ‘ of Baileys Horse Feeds and can be seen on many of their advertising merchandise.

Oakley Bubbling Spring, a legend of his own lifetime, top class pony stallion, can be found throughout the most prolific winning ponies pedigrees, as well as having an outstanding ridden career.

Bwlch Valentino, the ’Moses’ of the British Riding Pony, described as a stallion of such stature, both genetically and physically, that it is difficult to imagine that such potency could have been pulled together in one equine. A Northern Dancer among Riding Ponies, the patriarch of the British Riding Pony, he produced a dynasty of Cusop ponies, progeny includes chsmpion ponies, Bwlch Zephyr, Zip and Zingaree, Wingrove Minkino, Poliana, Pollys Gem, Oakley Bubbling Spring, Cusop Dignity and Cusop Flamingo.

Go back to previous page

This Site Designed by Barrie Tyrer Web Design
and Hosted By ribblesdale.net